Jews Most Pro-Gay Marriage of All Religious Groups

by Jordan
posted in Blog, Gay Ketubahs, Ketubah, Ketubahs
No comments yet 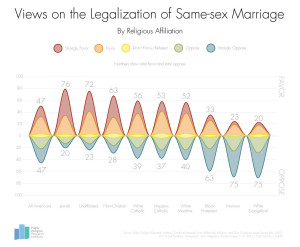 This study is fantastic. In an academic survey of attitudes towards same-sex marriage by religion, most Jews support gay marriage more than members of any other religion, by a non-trivial margin!

Therefore, we are scientifically and objectively the most pro-Gay rights religion!

We invented the idea of human rights 5,000 years ago: and now, we’re taking it to the next level!

Bagel (BGL) Ketubahs is the Original and Largest Ketubah store built by, for, and of Gay, Same-Sex, Lesbian & LGBT grooms and brides!!!